Mac Around The World

02 Mar Mac Around The World 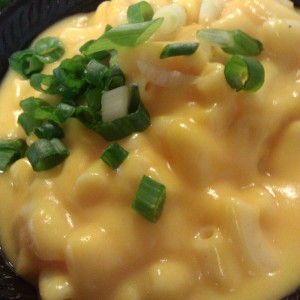 I love to travel. Exploring new and unfamiliar territories, interacting with different cultures and unacquainted customs, and let’s not forget the food; indulging in new foods for me is right up there at the top of the whole traveling experience. In fact, I try my best to sample as many foreign delicacies as possible, no matter how strange the name (or how weird it may look), but what I’ve come to realize is the one universal meal we can all relate to is macaroni and cheese. Sure there are different variations, but no matter what part of the world you’re in, the two ingredients which remain consistent are: the cheese and the pasta. Check out how some of our friends across the globe are enjoying their mac:

Brazil
In Brazil, a brand of cream cheese spread called Requeijão is used to make the sauce extra creamy.

Egypt, Macaroni Béchamel
The Egyptian way calls for ground meat between two layers of macaroni covered in béchamel sauce, which is a mixture of butter, flour, and milk. The cheese is added later.

Finland, Makaronilaatikko
This dish is made with ground beef, onion, and cheese. The milk and eggs used give it a custard-like base. It is commonly eaten with ketchup.

Germany, Käsespätzle
In Germany, they make their mac with cheese and caramelized onions.

Hungary, Túrós Csusza
Traditionally this dish is made with bacon, sour cream, and cottage cheese, and sometimes topped with lecsó (a mixed vegetable dish). However, it can also be eaten as a dessert when you substitute the bacon and salt for sugar.

India, Desi Mac
In India, mac and cheese is made with tomatoes, haldi (turmeric), garlic, dhania (cilantro leaves), and cheese.

Italy, Quattro formaggi
The classic Italian dish is made with ziti and four different kinds of cheeses.

Spain
In Spain, it is the pork sausage, tomato sauce, and onion combined with the grated cheese that truly makes this macaroni and cheese dish pop.

Sweden, Makaronipudding
The Swedish version of macaroni and cheese is commonly made with ham, leek, and cheese.

Switzerland, Älplermagronen
This macaroni and cheese dish is made with either Emmental or Appenzeller cheese. The Swiss version consists of cream and roasted onions, but in some regions of Switzerland, bacon, ham, and potatoes are also used.