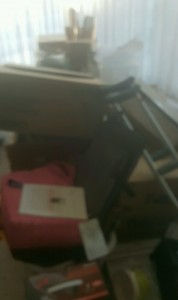 I have been going through a period of purging:  both people and things.  A lot is going on, and at times I have felt overwhelmed so I am making tough choices and changes.  One step is to go through all of my possessions, putting them into several categories:  keep, donate, or sell.

The other day while purging, I came across a pair of old sneakers.  I put them in the “donate” category.  I heard a voice say, “Give them to Ms. ABC”  I thought, “I don’t know if she needs Tennis Shoes?? But okay.”

Later that day, Ms. ABC came by my house for something non-related.  Now, I have stuff everywhere:  Boxes of stuff, stuff strewn on the floor –  just stuff.  Out of nowhere she says, “Do you have a pair of Tennis Shoes I can have?”  I looked at her in SHOCK!   I told her the story.  She started praising the Lord, and I praised Him along with her!  She put my shoes on and threw her old shoes in the garbage outside.

A few days later, I was with a friend having dinner.  Ironically, out of nowhere, she said to me, “I get boxes of stuff shipped to me every day:  designer purses, clothes, you name it.  Do you need anything?”  Again, none of this was planned.  But God sees everything and knows everything!

I was extremely disappointed that Kelly Chapman Ministries and mac-O-licious couldn’t do our ThanksGIVEing meals for the homeless this year.  Running a restaurant has been the toughest thing I have ever tried to do in my life (which was already filled with plenty of challenges).  It feels like I let a lot of people down:

Experiencing the shoe situation, and then having someone ask me “What do you need?  Anything?” felt like a gentle reminder from God that He’s got this!  He sees me working non-stop,  He sees the sacrifices, and He sees the attacks from the enemy.  He sees everything!  And He’s got it!

Allow me to further clarify:

And he said to them, “Pay attention to what you hear: with the measure you use, it will be measured to you, and still more will be added to you.”  Mark 4:24

“For I know the plans I have for you”, declares the Lord, “plans to prosper you and not to harm you, plans to give you hope and a future.” Jeremiah 29:11